I have been gardening for quite some time now and one thing that I’ve noticed throughout this time is that your garden will eventually get some form of pest living in it. These pests can be damaging to your plants or they can just be annoying generally it is a combination of both. One of the most common and most annoying garden pests are the house gnat. There are so many ways your garden can catch these pervasive little buggers that it is more of an inevitability than a chance. So here is how I suggest how to get rid of house gnats and how to hopefully keep them from becoming a large problem again.

The common “House Gnat” that most people encounter when container gardening indoors is actually called Fungus Gnats. While fungus gnats are similar to fruit flies there are some key differences, mainly coloring and choice of habitat. Fungus gnats are generally darker and live in moist wet ares. Whereas, fruit flies are lighter and stay near fruit and rotting food. 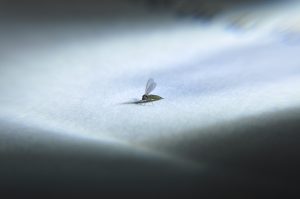 Most people realize they have a problem with fungus gnats when they see the mature adults walking on or flying around your plants. These adults while super annoying due to the fact that they are attracted to CO2 (your breath) are harmless to your plants. This unfortunately is not the same case with their larval stage.

Larval fruit gnats live in rich, damp, wet soil containing organic materials. These larvae feed on fungus, decomposing organic materials, and the fine root shoots of your plants. This destruction of your roots fine hair like tendrils can cause your plant to wilt, exhibit poor growth, lose it is vigor, or begin yellowing. In severe cases it may even kill off entire portions of your plants. 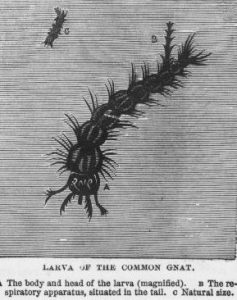 How to Prevent Them

The number one way to prevent fungus flies from thriving and creating problems is to limit the available habitat they have to reproduce and grow. The easiest way to do this is to simply water your plants appropriately. While simple in theory this idea of ideal watering is difficult to achieve in practice. The gnats thrive in the top .5 to 1.5 inches of moist or wet soil so letting this layer of soil dry out in between watering can drastically reduce the probability your garden will suffer from these pests. 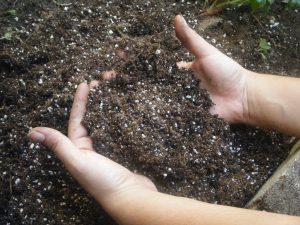 Considering how hard appropriate watering practices can be you may want to look into some modifications to your garden that can help prevent these pests from prospering. The easiest of these modifications would be to remove the top .5 to 1.5 inches of soil from your container, after your plant has matured a bit, and replacing it with sand or small rocks. This layer will drain and dry out quickly effectively removing a good portion of the gnats natural habitat. While the gnats can still get to the soil most will be fooled into thinking your plant is inhospitable. One variation I prefer to use instead of classic sand is colored sand or fish tank pebbles. They accomplish the same job just in a more colorful and complimentary fashion. The fish tank pebbles are my favorite and come in all sorts of colors.

Another modification you can make to your indoor garden to reduce the likely hood of catching the fungus gnat problem would be to convert to self watering pots. These pots water your plants roots through the bottom reservoir. By watering the bottom of your plant instead of the top you will effectively reduce the amount of habitable soil the fungus gnats have to support their larvae. I personally use both of these strategies in my home gardens. The self watering planters not only reduce the chances that you will have a fungus gnat issue they also reduce the amount of watering required and allow plants to grow to maturity in smaller containers. This combined with the fish tank rocks makes a beautiful and advantageous habitat for your plants and a disadvantageous environment for many pests including these nasty gnats.

How to Remove Organically

Unfortunately most people do not realize that they have fungus gnats until it is too late. As such, having an effective and easy way to remove them is a must have for all gardeners. There are a lot of different methods and strategies out there to get rid of a fungus gnat problem. Because this species has two main life stages it also has two separate problems.

There are also methods that involve introducing a predator species such as nematodes. I am personally trying to reduce the number of insect visitors in my apartment so these options are not in my tool bag.

How to Remove Artificially

As with the organic methods mentioned above the fungus gnat problem really does break into two categories: adult(gnat) and Juvenile (larvae). When using non organic methods be sure to use products that are safe for your given plant. There are many options out there and some will be harmless to flowers and ornamental plants while making fruits and vegetables inedible.

From what I have seen through my own experiences and the information I have gained through others I have found that the main reason any of these products will not work effectively is that they require up keep and repeat treatments. Regardless of which option you decide to utilize be sure to follow through with the treatment plan as some can take about a month to fully handle the infestation.

Where I Stand on The Whole Thing

Firstly, I want to reiterate that these gnats are a problem that I have faced numerous time over the years and there is no shame in catching this pest. They can come from anywhere: new plants, newly bought soils, or even an open window and as such you need to be prepared to thoroughly destroy these critters at the first signs. These pests can quickly spread from one plant to your entire garden so preventative measures are strongly suggested and immediate action upon discovery is a must. With each new encounter with fungus gnats a new surge of hatred accompanies there discovery. These little flying nuances are annoying for us but can cause serious damage to your plants root system. Action is a must.

I Hope This Helped,

This site uses Akismet to reduce spam. Learn how your comment data is processed.